Lalonde Spirit of the Seas Award

Captain Frank Zabrocky is the 2021 Lalonde Spirit of the Sea Award winner. He was introduced by Captain Deborah Dempsey the 2019 Lalonde Award Winner. The Lalonde Spirit of the Sea Award is the highest honor that the Council of American Master Mariners bestows on its members. It is named for CAMM member, Captain/Father Maurice Lalonde. Father Lalonde was a graduate from SUNY (New York State Maritime Academy) and served as a Naval Officer in World War II. After the war he returned to sea as a civilian mariner, sailing in all deck officer ratings, including Master Mariner. Captain Laonde came ashore and studied for the Catholic priesthood. After his ordination he returned to sea, donating his salary to his priestly order. After leaving the sea Captain/Father Lalonde spent time as a foreign missionary. He was a man of a tremendous giving nature and the recipients of this award represent this kind of overall selfless spirit.

Captain Zabrocky is a 1969 graduate of the United States Merchant Marine Academy. After graduation he worked his way through the officer ranks obtaining his Master’s license in 1981. In 1984 he was assigned as Master of the ss Doctor Lykes, a Seabee class vessel. No sailor goes to sea for over twenty years without coming home bursting with sea stories. And true for our awardee, one such story saw him in command in the winter north Pacific with typhoon force winds and seas.

With seas pounding the vessel, Captain Zabrocky was on the bridge for thirty-six hours. With the chief engineer directing operations in the engine room, and, they managed to keep the vessel hove-to and kept the ship, crew and cargo safe. During the height of the storm, Captain Zabrocky was able to keep quiet his inner voice telling him “you know, this vessel could actually break apart.” Instead, he maintained calm throughout the storm. His reputation for calm and skill during a very trying time traveled throughout the Lykes fleet. Sailors would often wait for job openings aboard vessels under his command.

Another exploit resulted in Captain Zabrocky receiving the US Navy’s Public Service Award, the third highest form of public recognition granted by the Navy. In 1991, during Desert Storm, multiple ships declined the mission of delivering supplies to 8,000 marines at the port of Al Mishab in Saudi Arabia. At that time, the port was located within artillery range of Iraqi forces. Captain Zabrocky felt that as an American seafarer who had been educated at Kings Point at tax payer’s expense, it was his duty and honor to complete the mission. To deliver the  highly explosive cargo to Al Mishab required his ship to transit oil covered and mine filled waters. Despite these obstacles, Captain Zabrocky took his ship, the SS Mallory Lykes into Al Mishab and while the port was under missile attack, offloaded the vital cargo.

The trip on the SS Mallory Lykes was his last trip to sea. Captain Zabrocky ventured ashore becoming an instructor at MITAGS (Maritime Institute of Technology and Graduate Studies) teaching ARPA. In1993, he moved closer to his home in Connecticut, working with the NCB (National Cargo Bureau) in New York City. After being selected to sail Master in1984, Captain Zabrocky joined CAMM. In 2000, he was elected National President of CAMM, in 2012 he was elected North Atlantic Vice President and in 2020 became Positions VP.

Coming ashore in 1991 brought the sweetness of family – marrying Lois and raising two children. When not working for CAMM, you will find him spending time at his son’s school. Friday nights are reserved for taking a crew of these kids from the Maplebrook School (a school which offers a superior education to youngsters who learn differently) out to dinner to socialize and share time together. Many of these students are from the international community and their parents  cannot always visit them.

Captain Zabrocky delivered a wheelchair to a maimed man on the dock in Ecuador so that that gentleman would no longer have to drag his body down to the ship to beg. Captain Zabrocky would push him up and down the dock while checking his ship’s draft. The Spirit of the Sea Award speaks to empathy and compassion. One’s maritime career can serve as that vessel, that keel, that foundation, upon which to demonstrate the attributes of this award - humanitarianism, professionalism, seamanship, life-time achievement, noteworthy accomplishments, and contributions to the maritime industry – thereby living that Spirit of the Sea in everyday life.

The Father Maurice Lalonde Spirit of the Seas Award is the highest honor that the Council of American Master Mariners can give its members. It is named for one of our members, Captain/Father Maurice Lalonde. Father Lalonde, in his early career, graduated from the New York State Maritime Academy and served as a Naval Officer in WW II. He then went back to sea as a civilian mariner, sailing in all deck officer billets, including Master Mariner. He then came ashore and studied for the Catholic priesthood. After his ordination, he went back to sea for awhile and donated his salary to his priestly order. He again returned ashore and spent most of his remaining career as a foreign missionary. He obviously is a man of a tremendously giving nature. The recipients of this award represent this kind of overall selfless spirit. 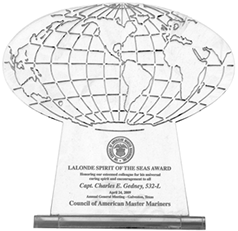 Nominations for the Lalonde “Spirit of the Seas” award open in September and is awarded at the National Annual General Meeting the following spring.

Deadline for nominations is January 15 of  the presentation year.

The Lalonde “Spirit of the Seas” Award is the Council’s most distinguished honor. The award is made annually or as deemed appropriate by an Awards Committee comprised of the National’s Vice Presidents and Ex-Officio National President.

Nominations are open to any member in good standing for all of the following: humanitarianism, professionalism, seamanship, life-time achievement and noteworthy accomplishments, along with contributions to the maritime industry and the 'Spirit of the Seas' in their everyday lives. An eligible nominee may be a member in any category of the CAMM National organization in good standing (who is/was current in their dues to CAMM National and to their chapter, if they were also chapter members). Individuals must be nominated by a CAMM National member who also is in good standing.

For additional applications, information or guidelines and rules, contact Captain Lewis (captlewis@mastermariner.com)  or your Chapter President.

Lalonde Spirit of the Seas Award - Winner Notification and Acceptance

The winner will be notified in advance by the Lalonde Review Committee. If nominee is the winner, he/she must make every effort to attend the annual meeting Closing Dinner. Because of the prestigious nature of this award, the winner’s Chapter should be an enabler to encourage and assist winner to be present to receive the award in person. If because of poor health, the winner can’t attend please list their designee (show name & ID number) who will accept the award in their behalf.